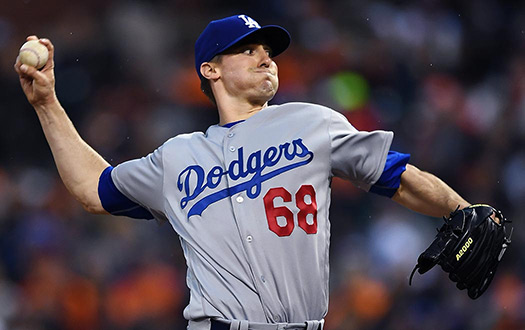 It’s an elimination game: down 3 games to 1, the Jays have to win or they’re done. This game is a rematch of pitchers from Game One: Edinson Volquez of the Royals and Marco Estrada of the Jays. Volquez is 1-1 with a 2.31 ERA in this postseason and went six scoreless innings against the Jays in Game One. Estrada is also 1-1 in the postseason with a 3.09 ERA. He went 5 1/3 innings against the Royals in Game One, giving up six hits and three runs.

This one is also an elimination game: the Mets are one win away from going on the World Series. If the Cubs are to make the prediction in the movie “Back to the Future” come true, they have to win the next four games. The Mets send out lefty Steven Matz, making his first appearance in the NLCS after giving up three runs in five innings against the Dodgers in the NLDS. He’ll be opposed by Jason Hammel, also appearing for the first time in the NLCS after a short (four runs in three innings) outing against the Cardinals in the NLDS.

After two five-game division series, neither team has its best pitcher available for Game One. Tonight the Jays send Marco Estrada to the hill. He started Game Three of their half of the ALDS when the Jays were down 0-2 and had to win; he went 6 1/3 innings and allowed the Rangers only one run. He’ll face old friend Edinson Volquez, who went 5 2/3 innings and gave up three runs to the Astros in Game Three of the other half of the ALDS, losing to Dallas Kuechel.

For added drama, two and a half-months ago the Royals and Blue Jays played a game that featured three hit-by-pitches, three ejections, several other up-and-in fastballs and one benches-clearing incident. Whether there are any hard feelings I leave to your imagination.

The Royals send Edinson Volquez (13-9, 3.55 ERA) out to face the Astros’ Dallas Keuchel (20-8, 2.48 ERA). Keuchel is the American League’s only 20-game winner and went six scoreless innings in the Wild Card game against the Yankees. Volquez has been a serviceable pitcher his entire 11-year career, winning 13 for the second year in a row. MLB has some more game notes.

The Blue Jays are down 0-2 in this series and have to win today. To that end they send Marco Estrada (who?) out to save their season. He was 13-8 with a 3.13 ERA on the year. The Rangers counter with lefty Martin Perez (3-6, 4.46 ERA). He would seem to be an odd choice, since right-handed batters hit .304 against him this season and the Jays have a lot of them. He finished strongly, though, giving up only one earned run over 13 innings in his last two starts. Game notes.