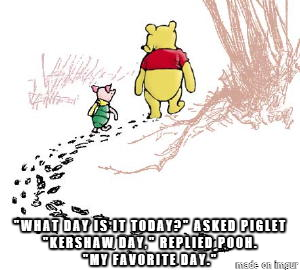 To celebrate the 200th anniversary of Francis Scott Key’s most famous composition, there will be special events honoring the National Anthem before today’s games. In Baltimore (site of Ft. McHenry, class, had you forgotten?) there will be a special program, and in other ballparks the video montage PBS has been using to promote its production Star-Spangled Banner: The Bicentennial of our National Anthem will be shown.

One hopes the Dodgers didn’t wear out their bats in yesterday’s 17-run explosion.

His opponent will be Yusmeiro Petit, a 30-year-old right-hander who first came to the big leagues in 2006 with the Marlins. He’s bounced between the minors and majors with two more teams since then, going 19-24 overall. Earlier this season he set a major league record by retiring 46 consecutive batters before allowing one to reach base. In his last outing he threw 84 pitches in a complete game win over the D-Backs.