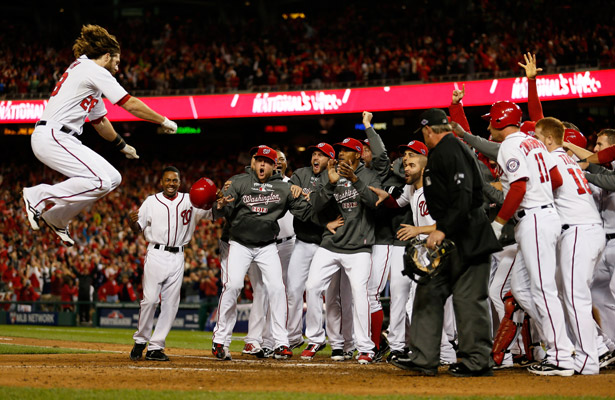 After yesterday’s heroics, we’ll see who has what left in the tank.

The first game today is Game Five between the Orioles and Yankees at 5:00PM Eastern on TBS. It’s a rematch between Game One starters Jason Hammel of the Os and C.C. Sabathia of the Yankees. However, Alex Rodriguez has been benched and Eric Chavez will start at third, so expect minutes of airtime to be wasted discussing that. It’s pretty clear that A-Rod hasn’t been hitting; he’s got nine strikeouts in sixteen at-bats. If it weren’t for the fact that he’s A-Rod with his $29M-per-season salary this would be of no news value at all.

The second game is Game Five between the Nationals and the Cardinals. The Game One starters are back for this game as well: Gio Gonzalez for the Nats and Adam Wainright for the Cards. The game starts at 8:30PM Eastern on TBS.

First up today at 1:00PM Eastern, Giants – Reds in Game 5. Matt Cain for the Giants and Mat Latos for the Reds. Winner-take-all, do-or-die, lose-and-go-home: pick your cliché. The Giants’ bats have seemingly finally awakened (12 hits in the series’ first three games, 11 in Game 4). If that holds up the Reds may be in trouble. At least they’re in Great American Ball Park in Cincinnati.

Update: Being at home did the Reds no good as Mat Latos surrendered six runs in the fifth inning, four on a grand slam by Buster Posey, and they couldn’t come back. The Giants win 6 – 4.

Game two today is in Washington at 4:00PM Eastern, Cardinals – Nationals, Game Four of their series with the Nationals down two games to one. It’s a must-win for the DC team, and they have to get production from more players than Ryan Zimmerman and Ian Desmond. Today’s pitchers: Kyle Lohse for the Cards and Ross Detwiler for the Nats.

Update: Ex-Dodger Jayson Werth hits a walkoff solo home run in the bottom of the ninth inning and the Nats force a Game Five tomorrow, winning 2 – 1.

Today’s third game is at Yankee Stadium, Orioles – Yankees at 7:30PM Eastern. The Orioles call on Joe Saunders to help them get past that stunning loss in twelve innings yesterday, while the Yankees pitch Phil Hughes. The Yankees lead the series two games to one, so the Os have to win to push the series to five games.

Update: Holy cow, as Harry Caray would say. The Orioles won 2 – 1 in 13 innings on a double by Machado and a subsequent double by J.J. Hardy. That forces a Game Five Friday evening at 5:00PM Eastern in the Bronx.

The final game of the day is Game Five in Oakland, Tigers – Athletics. If you use experience as a guide you’d have to go with the Tigers in this one, since they’re putting Game One starter Verlander out there again. Can the As Jarrod Parker possibly repeat his performance in Game One, when he gave up three runs in 6 1/3 innings? But, as Jim Leyland said last night after that improbable comeback by the As, “Yeah, well, it’s baseball,” Leyland said. “I mean, that’s why this is the greatest game of all. It looked like we were going to get it. We didn’t do it. We didn’t quite get the 27 outs. That’s part of the game.”

Update: Verlander was just too good for the As. He shut them out 6 – 0 and the Tigers go on to the ALCS to face either the Orioles or the Yankees.

Four games today, and the Washington – St. Louis one will be special if you care about the broadcasters. It’s on the MLB Network at 1:00PM Eastern, and Bob Costas and Jim Kaat will be in the booth. It’s been a long time since Costas last did a playoff game (for NBC in 1999), and the multiple Emmy-winning sportscaster has since moved to the MLB Network. This will be the first post-season game he’s done since that ’99 one. Kaat’s an Emmy-winning broadcaster in his own right. Oh, and if that’s not enough history, it’s the first postseason game in Washington since 1933.

The pitchers will be ex-Dodger, ex-Ray, ex-Tiger, ex-Diamondback, ex-White Sox, ex-Cardinal Edwin Jackson for the Nationals (10-11, 4.03 ERA) against Chris Carpenter (0-2, 3.71 ERA). Carpenter’s comeback from thoracic outlet syndrome is quite a story all of itself. He had surgery to repair it on July 19, yet here he is three months later pitching in the big leagues. The series is tied 1-1.

The second game of the day also starts at 4:00PM Eastern at Great American Ball Park in Cincinnati. It’s Game Four of the Giants – Reds series, and the Reds lead two games to one. The Giants will start Barry Zito with the entire bullpen in reserve for this must-win game. The Reds haven’t yet announced a starter. Game One starter Johnny Cueto is still injured, and it appears their options consist of Mat Latos on short rest or Mike Leake. Neither one is ideal. Latos pitched four innings in relief in Game One, and Leake was 8-9 with a 4.58 ERA for the season and would have to replace Cueto on the roster, meaning Cueto would be ineligible for the NLCS if the Reds get that far.

The third game of the day is Game Three between the Yankees and Orioles at Yankee Stadium, starting at 7:30PM Eastern. The starting pitchers are old friend Hiroki Kuroda (16-11, 3.32 ERA) for the Yankees and Miguel Gonzalez (9-4, 3.25 ERA). The two teams have played 20 times this season and each has won ten games.

The last game of the day is in Oakland at 9:30PM Eastern, where the Athletics play the Tigers in a do-or-die game. The Tigers lead the series two games to one. The As will trot out yet another rookie pitcher, A.J. Griffin (7-1, 3.06 ERA), while the Tigers counter with Max Scherzer (16-7, 3.74 ERA).

Only two games today. First, at 4:30PM Eastern, the Nationals take on the Cardinals with a one-game lead in the series. Today’s pitchers are Jordan Zimmermann for the Nats and Jaime Garcia for the Cardinals.

Then, at 8:30PM Eastern, the Yankees play the Orioles. The Yankees exploded for five runs in the top of the ninth inning in Game One off the best closer in the major leagues yesterday to take a one-game lead in the series. Today’s pitchers are Andy Pettitte for the Yankees and Wei-Yin Chen for the Os. This will be Pettitte’s 43rd playoff start and Chen’s first. Baseball being unpredictable, Chen will probably throw a shutout for six innings while Pettitte gets blown out after facing seven hitters.

Today is the first big day of the Division Series games, with four on the schedule.

First, at 12:00PM Eastern, the Tigers host the Athletics. The Tigers lead the series one game to none on the strength of Justin Verlander’s strong pitching and a home run from Alex Avila. Doug Fister starts for the Tigers and Tommy Milone goes for the As.

Update: Detroit wins 5 – 4 on a sac fly by Don Kelly in the bottom of the ninth.

The second game of the day is Game One between the Nationals and Cardinals in St. Louis at 3:00pm Eastern. The Nats will pitch 21-game winner Gio Gonzales while the Cardinals put Adam Wainwright on the hill.

Update: The Nationals win 3 – 2 on a 2-run pinch-hit single in the 8th inning by Tyler Moore.

The third game of the day begins at 6:00PM Eastern and features Game One between the Yankees at the Orioles in Baltimore. The Yankees’ starter will be CC Sabathia; the Orioles will pitch Jason Hammel. There’s rain forecast for the city, however, so this game may or may not be begun or completed.

Update: The game is in a rain delay at 7:00PM Eastern with no word yet on when or whether it will be played.

Finally, Game Two between the Giants and Reds is at 9:30PM Eastern from San Francisco. The Reds will put Bronson Arroyo on the hill while the Giants pitch Madison Bumgarner. One hopes they each pitch better than their teams’ relievers did in the ninth inning in Game One, when there were 3 wild pitches and a passed ball between the two teams. That didn’t keep the Reds from winning the game, however.

Update: The Giants – Reds game has begun. It’s being televised on TNT.