The young buck is back

The Dodgers send LHP Julio Urias (3-0, 3.53 ERA) to the Coors Field mound to face the Rockies’ LHP Kyle Freeland (2-1, 3.54 ERA). Urias gave up one run in six innings against the Astros last Saturday. This will be Freeland’s second start this year against the Dodgers; on August 22 he gave up three runs on four hits in six-plus innings.

Dustin May went 5 1/3 innings after Graterol and Kolarek went the first two innings and struck out six in the process.

The Rays send out LHP Blake Snell (6-7, 4.28 ERA) to make his first start since undergoing arthroscopic surgery to remove “loose bodies” from his left elbow on July 25. The Rays probably won’t let him go more than two or three innings. He’ll face the Dodgers’ RHP Ross Stripling (4-4, 3.40 ERA), who’s made 14 starts and 15 relief appearances this year. He last started six days ago against the Orioles; he went three innings, giving up three hits and one run.

Here’s Gyorko’s go-ahead single in the 9th inning on Sunday:

The Dodgers held Ryu out of his last scheduled start as they juggle six pitchers in the rotation. He pitched well in his last game, holding Arizona to one run in six innings. Strasburg is on a 34-inning scoreless streak. How has each pitcher done against the opponent?

Strasburg has a 2.82 ERA in six career starts against the Dodgers and a 0.94 WHIP, allowing two earned runs or fewer in five of the starts. Ryu has made only one start against Washington, a loss when he allowed four runs in seven innings at home earlier this season.

I missed this back when news first hit that the Marlins banned facial hair and Mattingly (he of the exceptional mustache when he played for the Yankees) agreed to enforce it, but the American Mustache Institute reacted with sorrow at that horrific turn of events.

“The entire episode marks yet another dark chapter in the way the Mustached American community can often be treated,” said Dr. Adam Paul Causgrove, chief executive officer of the American Mustache Institute. “But we will continue to fight for those who have no representation and firmly push our agenda, making the case of the power of facial hair and all that it brings to all walks of life.”

No new hire to replace Mattingly yet. I suspect (hope?) the Dodgers won’t step on the World Series by announcing a new manager in the midst of the games. Remember 2007 when Scott Boras announced that Alex Rodriguez, his client, was going to opt out of his contract with the Yankees in the middle of Game Four?

Should the Dodgers keep Puig? Will they sign Greinke? Can Pederson find a hitting stroke? Who’s gonna play second base? Will Ryu, McCarthy and possibly Arroyo recover? Can Alex Wood become an effective pitcher? Will Bolsinger improve?

Buster Olney of ESPN offers up seven things the Dodgers should do this off-season.

On Puig: Olney reports that on the day Puig started in the series against the Mets he caught the last bus from the hotel, he didn’t start the stretch period with the rest of the team and he didn’t take as many cuts in the batting cage as usual. He thinks the Dodgers need to decide whether Yasiel’s “quirks” can be lived with and if so, they need to get the other players to learn to live with them too.

Well, maybe. From what we’ve read in the media Puig does seem to have a little trouble with clocks, but he’s shown nothing to me that would indicate he’s not a team player.

On clubhouse culture: He says some players felt “unsettled because for others besides Kershaw and Adrian Gonzalez and a handful of others, there was no sense about who might be headed out the door and who might arrive. Some players spoke about a diminished sense of investment in each other.” Olney then says the Giants, Cardinals and Pirates all exude mutual respect and esprit de corps, and the Dodgers don’t have it.

Who’s to say? He’s certainly in a better position to know that than am I. I can certainly understand if some of the everyday players whose names no one but fans know might feel like they’re parts to be slotted in from day-to-day.

If you’ve got an Insider account at ESPN you can read the whole thing.

It’s a pitching rematch of last Saturday’s game featuring the Cards’ Michael Wacha versus the Dodgers’ Carlos Frias. Frias won the first game 5-1, going seven innings and giving up just that (unearned) run. Wacha gave up just three hits but four earned runs, including a three-run homer to Yasmani Grandal in the sixth which chased him. It was Wacha’s only loss of the season so far: he’s 7-1 with a 2.27 ERA. Frias is 4-2 with a 4.29 ERA.

I think Vassegh co-hosts Dodger Talk on AM570 radio in LA. 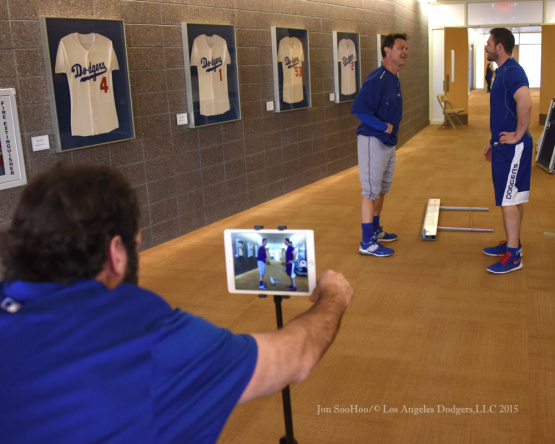